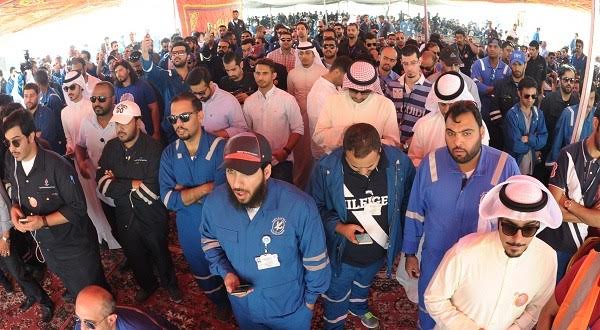 The cabinet said in a statement on Sunday it had asked Kuwait Petroleum Corporation (KPC) to take all necessary measures in order to provide required workers in order to keep work and production at oil facilities, and to honor local and international commitments. (Image courtesy: KUNA)

Kuwait: The cabinet directed competent authorities to take legal action against unacceptable practices, and with bringing to accountability anybody involved in the disruption of the country's vital utilities.

The cabinet said in a statement on Sunday it had asked Kuwait Petroleum Corporation (KPC) to take all necessary measures in order to provide required workers in order to keep work and production at oil facilities, and to honor local and international commitments.

It urged all workers in the oil sector to show responsibility, sacrifice and positive responsible response by giving top priority to the country's higher interest.

The cabinet added that it had monitored, with deep sorrow and much resentment, the negative effects of the strike carried out by some oil workers since it targets the disruption of vital oil facilities.

The cabinet also reviewed relevant dimensions, aftershocks, details and estimated losses, not to mention other direct and indirect harms that could damage the country's reputation and status.

The cabinet voiced full respect to all constitutional rights, mainly public liberties and freedom of expression, but within specific limits set out by Law 11/1996, excluding the right of strike due to its serious impacts on the public interest.

This makes the strike an illegitimate act and violation of the law, which should be resolutely addressed and requires legal action against all those involved.

However, the cabinet appreciated the nature and significance of work and efforts of the workers of this vital oil sector, and highly commended all sincere efforts, distinguished efficient staff and all works of serious and sensitive nature at different positions and levels.

The country's critical economic situation triggered off by low oil prices and relevant adverse ramifications and challenges at present and in the future, requires that everybody should show national responsibility, sacrifice and positive responsible response to such challenges, and give top priority to higher interests, rather than narrow ones, it said.

In this regard, according to the statement, the Deputy Premier, Finance Minister and Acting Minister had announced that KPC would keep intact oil workers' rights and benefits gained in line with the arbitration body and relevant international conventions.

Article 103 of Law 6/2010 regarding working in the private sector, which applies to the oil sector, stipulates that employers and their unions must respect all laws in the state and exercise their activities within specific goals, and regulate the Director General of Saudia Saleh Al-Jasser cabinet added.

It emphasized that there should not be any threat to the country's interests, reputation or status, warning that any threat cannot be condoned by all sincere and honest Kuwaitis.