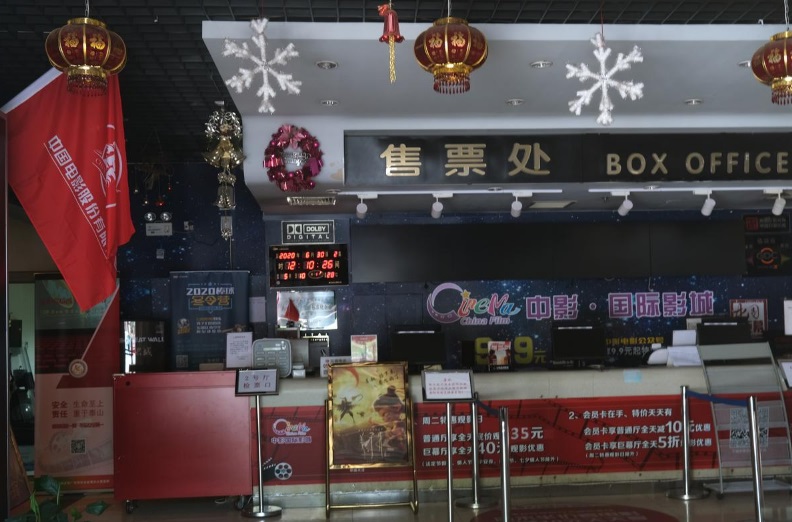 An empty box office is seen at the China Film Cinema, which has been closed following the coronavirus disease (COVID-19) outbreak, in Beijing, China June 30, 2020. REUTERS/Tingshu Wang/File Photo

Shanghai: China will allow most cinemas to re-open from July 20, the film administration said on Thursday, six months after they were forced to close as part of draconian measures to contain the novel coronavirus.

The relaxation has been long awaited in the world’s second-largest film market, where lockdowns have eased gradually as infections have dropped sharply since March, with many restaurants and malls open for months.

Cinemas in low-risk areas will resume operations but curbs, from limited film showings to mandatory masks, will still apply, although those in medium- and high-risk areas will stay shut, the China Film Administration said in a statement.

No area in China is now categorised as high-risk, the government said, however, and just four neighbourhoods in Beijing, the capital, are graded medium-risk.

“This is breaking news for the industry and people are thrilled,” said Gao Jun, former general manager of Beijing-headquartered Xinyinglian Cinema Chain.

“This industry is in a desperate situation because of high operational cost: the rent.”

Cinemas that re-open will have to limit audiences to 30 percent of normal and keep vacant seats between patrons, who are required to book in advance and not carry in food and drinks, the film authority said.

The theatres were forced to shut in late January as China battled the virus that emerged in its central city of Wuhan late last year, before spreading worldwide to cause 14 million infections and 583,000 deaths.

Shares in China’s largest cinema owner, Wanda Film jumped on the news, to end up 1.1% percent, outperforming a drop of 5% in the benchmark Shenzhen Composite Index.

“Wanda Film’s preparations are progressing in an orderly fashion,” the company, which runs more than 600 cinemas nationwide, said in a statement, adding that it planned to announce re-openings.

Last week, it forecast a swing to a first-half net loss of up to 1.6 billion yuan ($230 million), from a gain of 524 million yuan in the corresponding period last year.

Social media users welcomed the news, despite the restrictions. “I have many films that I want to watch in the cinema!” said one user on Sina Weibo.