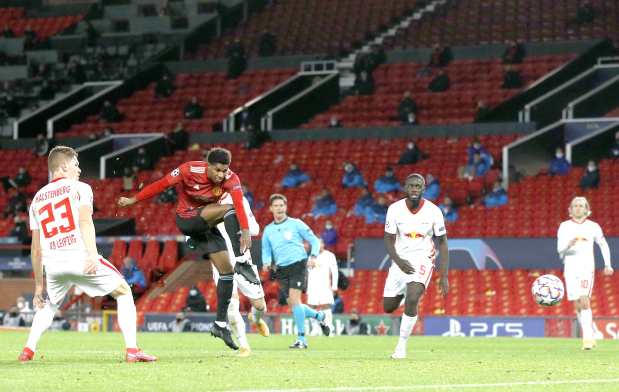 Rashford came on for Greenwood in the 63rd minute and soon set about deciding the match, after the Germans had looked capable of causing United problems.

The England striker raced on to a long ball from Fernandes to make it 2-0 in the 74th minute, with the initial offside call being overturned on review.

Rashford made it 3-0 after Fred robbed Marcel Sabitzer and Anthony Martial added the fourth from the penalty spot.

The hat-trick, inside 29 minutes, was completed in stoppage time when Rashford blasted home after good work from Martial who cut in from the left.

Meanwhile, an early goal from Ousmane Dembele and a late Lionel Messi penalty gave Barcelona a 2-0 win away to Juventus after Alvaro Morata had three goals disallowed for offside for the Serie A side.

Chelsea kickstarted their group campaign by coasting to a 4-0 win at Krasnodar thanks to goals from Callum Hudson-Odoi, Timo Werner, Hakim Ziyech and a late strike from Christian Pulisic.

PSG’s Brazil forward Neymar was forced off in the 26th minute due to a thigh injury and was replaced by Pablo Sarabia.