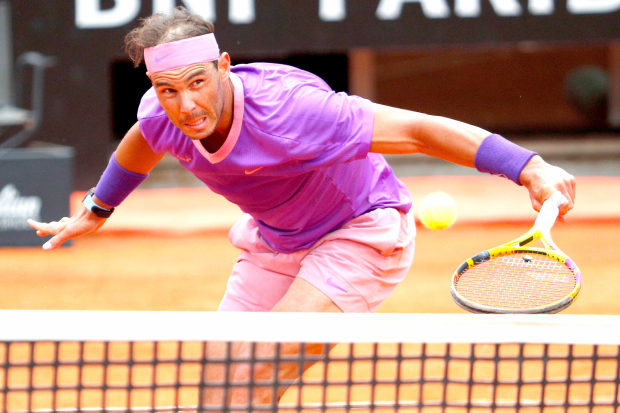 ROME: Exactly one week on from his quarter-final loss to Alexander Zverev at the Mutua Madrid Open, Rafael Nadal took his revenge against the German yesterday at the Internazionali BNL d’Italia.

The nine-time champion saved all eight break points he faced in the second set to defeat Zverev 6-3, 6-4 after two hours on Centre Court. Nadal’s win ended a streak of three straight losses against the World No. 6 and improved his ATP Head2Head record against Zverev to 6-3.

“[I am] happy. I played a very solid match with not many mistakes, playing the way that I have to,” Nadal said in his post-match interview. “[It is] an important victory for me against a great player.”

The Spaniard is through to his 12th semi-final in Rome. Nadal will attempt to extend his unbeaten 11-0 semi-final record at the Foro Italico when he faces first-time ATP Masters 1000 semi-finalist Reilly Opelka today. Opelka saved all four break points he faced to defeat Argentine qualifier Federico Delbonis 7-5, 7-6(2) on Grand Stand Arena.

“[I will face] a big chance against a player who has almost an unreturnable serve. [Reilly] is playing well,” Nadal said. “I need to be very focussed with my serve and then try to be ready to accept [the situation] and be [engaged] on the return. That is what I am looking for.”

In the first set, Nadal used his forehand to control the centre of the court and found consistent success behind his second-serve return (9/13). The 35-time Masters 1000 titlist raced into a 4-0 lead, but Zverev played with increased aggression from the baseline to reduce the gap. When serving for the set at 5-3, Nadal targeted Zverev’s backhand to save break point and convert his first set point.

Down 0/40 on his serve at 1-2 in the second set, Nadal played his way out of trouble with strong serving and powerful forehands. The second seed carried his momentum into the following game, where he dragged his opponent out of position with his forehand and broke serve with a series of topspin backhands. Nadal saved a further five break points in the second set and he clinched his place in the semi-finals by serving and volleying on his first match point.

Meanwhile, Novak Djokovic’s quarter-final with Stefanos Tsitsipas was halted by persistent rain with the world number one a set and a game down.

Reigning champion Djokovic, who is seeking a sixth triumph in Rome, struggled to get going against Tsitsipas and trails 6-4 2-1 ahead of the scheduled resumption of play today.