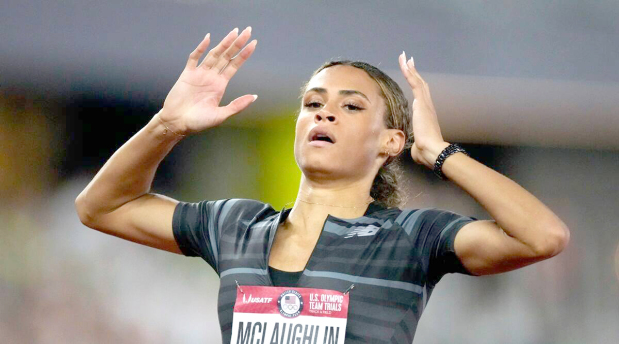 TOKYO: American Sydney McLaughlin is taking a fighting spirit into the 400 metres hurdles in Tokyo.

The 21-year-old broke the world record last month as she won the US Olympic trials in Eugene, Oregon in 51.90 seconds, becoming the first woman to finish the event in under 52 seconds, after joining forces in 2020 with coach Bob Kersee.

She points to Kersee, who famously trained his six-time Olympic medal-winning wife, Jackie Joyner-Kersee, as the biggest influence in that triumph. She told reporters in the lead-up to the Games that he put her in the mindset of a prize fighter, educating her in the world of boxing as inspiration.

“He was like, you know, this isn’t the ‘Thrilla in Manila,’ this is the ‘Queen in Eugene’ and telling me that right before I went to the final race,” said McLaughlin, the silver medal winner in the 400m hurdles at the 2019 World Championships.

The Thrilla in Manila – which pitted rivals Muhammad Ali and Joe Frazier against each other 46 years ago – is an apt metaphor for the fight McLaughlin faces at the Tokyo Olympics.

Reigning Olympic and world champion Dalilah Muhammad, her chief rival, stands between her and the top of the podium.

With a field that also includes Dutchwoman Femke Bol, 21, who is undefeated in 2021, she will need to keep her guard up.

Kersee is “preparing me for the left hook, and they’re definitely going to come out punching and be ready,” said McLaughlin. “But as long as I’m prepared and I’m focused on the things that we’re trying to do, then I should be able to avoid it.”

She views herself as an entirely different athlete than in 2016, when she finished 16th at the Rio Olympics, with a trio of Diamond League wins in 2019.

“I was so young and I wasn’t really sure what to expect. I think having that experience now, definitely I’m in the right headspace going in,” she said. “I know what to kind of expect.”