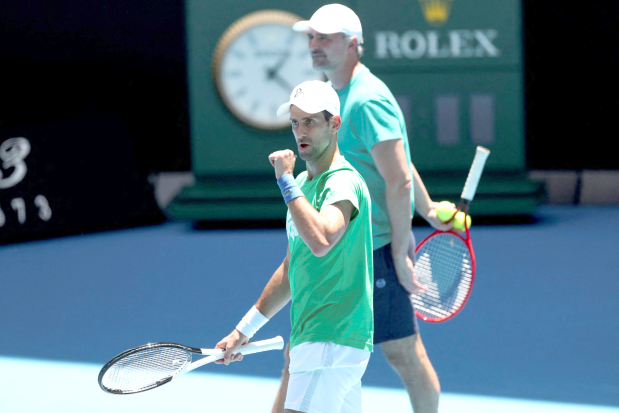 Djokovic gestures as he practises at Melbourne Park

MELBOURNE: World number one Novak Djokovic was confirmed in the Australian Open draw at a delayed ceremony yesterday even though the Serb’s bid for a record 21st Grand Slam title could yet be cancelled by Australian authorities.

The 34-year-old defending champion was bracketed to play unseeded fellow Serb Miomir Kecmanovic in the first round at Melbourne Park after organisers delayed the draw for more than an hour without explanation.

Tournament director Craig Tiley declined to take questions at the end of the subdued ceremony, with Australian Immigration Minister Alex Hawke still weighing whether to revoke Djokovic’s visa for a second time after it was cancelled on his arrival at Melbourne airport.

Djokovic’s inclusion in the draw was greeted with scepticism on social media, with fans predicting organisers would have to do another draw before the tournament starts on Monday.

Sixth seed Rafa Nadal, who is level with Djokovic on 20 Grand Slam titles along with the absent Roger Federer, will open his campaign against unseeded American Marcos Giron.

Russian second seed Daniil Medvedev, who was thrashed by Djokovic in last year’s final before turning the tables on the Serb in the U.S. Open decider, will play Swiss Henri Laaksonen.

In the women’s draw, top seed and home hero Ash Barty will start her bid for a maiden Australian Open title against a qualifier.