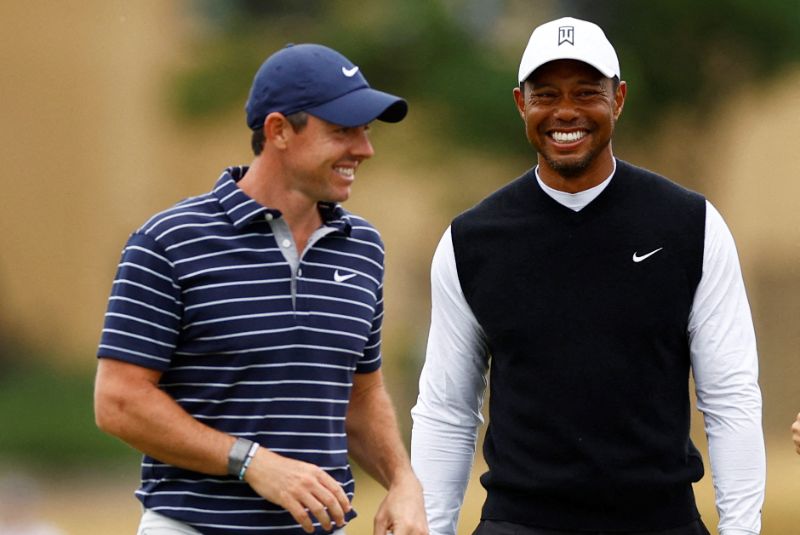 Tiger Woods of the U.S. and Northern Ireland's Rory McIlroy of Team Woods during the Celebration of Champions four hole tournament

Tiger Woods appeared in just three tournaments this year and finished only one, but his popularity among golf fans remains unmatched.

Woods' appeal was confirmed Tuesday when the PGA Tour announced that the 15-time major champion earned $15 million as the top performer in the Player Impact programme (PIP).

The tour makes $100 million in PIP money available annually to players who "generate the most positive interest in the PGA Tour." The formula takes into account such metrics as Google searches, Q rating, Nielsen brand exposure rating, MVP index rating and Meltwater mentions measuring the frequency of coverage in multiple media.

Woods played an extremely limited schedule this year as he keep working his way back from a February 2021 car crash that caused multiple leg injuries. He came in 47th place at the Masters, withdrew from the PGA Championship after the third round and missed the cut at the Open Championship.

McIlroy was far busier than Woods, appearing in 14 PGA Tour events plus the World Golf Championships Match Play event and all four majors.

The PIP plan was instituted in 2021, when Woods came in first to pocket $8 million. Phil Mickelson received $6 million as the runner-up, but he was ineligible to receive PIP funds this year after leaving the PGA Tour to play on the Saudi-backed LIV Golf series.

Bryson DeChambeau, Dustin Johnson, Brooks Koepka and Bubba Watson, who were all in the top 10 in the inaugural PIP rankings last year, also exited the PGA Tour for LIV.