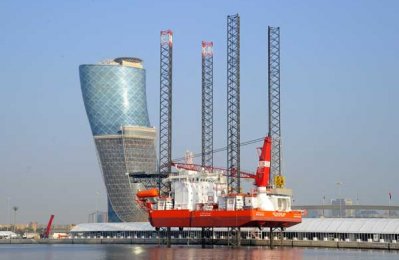 Abu Dhabi-based Gulf Marine Services (GMS), an owner and operator of self-propelled and self-elevating vessels (SESVs), will be showcasing the latest addition to its fleet at the upcoming Abu Dhabi International Petroleum Exhibition and Conference (Adipec) in the UAE capital.

The GMS Evolution, an E-Class vessel built at GMS’ shipyard in Mussafah, moored outside Abu Dhabi National Exhibitions Company (Adnec) over the weekend and jacked up today (November 6), ahead of the opening of the event tomorrow (November 7), said a statement from GMS.

The event will run until November 10 at the Abu Dhabi National Exhibition Centre.

Moreover, no vessel of this size has ever previously been physically present at Adipec. GMS Evolution has been fitted with a revolutionary new cantilever system, which gives clients a much greater range of options in the way they use the company’s barges to service their offshore assets, it said.

This new system, developed in partnership with Norwegian systems engineer Dwellop, offers new cost-effective solutions for work that has traditionally been performed by more expensive non-propelled drilling rigs, it added.

GMS’ chief executive Duncan Anderson, said: “The assets we tend to service are located mainly in shallow water and were installed quite some time ago, so that a lot of the infrastructure is well advanced in its useful life.”

“This creates asset integrity issues, which traditional servicing methods will struggle to resolve, because only smaller weights can be transferred and handled, a function for which the new cantilever system is ideally suited,” he said.

“Using the cantilever system, clients will be able to deploy sooner, will have no requirement for tugs and the time spent rigging up, rigging down and lifting backwards and forwards will be removed. Basically, large amounts of non-productive time can be saved, both for ourselves and for our sub-contractors,” he added. – TradeArabia News Service